See all this Month's Articles

Republican leaders in Washington, D.C. looking to reform the Medicaid system will be trying to balance three competing priorities:

In this article, we provide a brief overview of how the Medicaid program works; the impact of Medicaid expansion, including pre- and postexpansion Medicaid enrollment numbers; and Republicans’ proposed solutions.

Medicaid spending topped $500 billion in 2015, and it’s projected to approach $1 trillion by 2025, according to the Centers for Medicare & Medicaid Services (CMS).

When President Lyndon Johnson signed the Medicaid bill into law in 1965, it was supported by roughly half of the Republicans who voted on it. It’s unlikely he knew the program—which cost less than $1 billion in 1966, according to Medicaid Spending: A Brief History by John Klemm (CMS, 2000)—would become what it is today.

In stark contrast with the ACA, the Medicaid program was passed with bipartisan support, which still stands today. While there are competing visions for how Medicaid should operate, the 2016 Republican platform made it clear both political parties remain steadfast in their support for continuing the program.

When the ACA was passed in 2010, the federal government incentivized states to expand their Medicaid programs by promising to pay 100 percent of expansion costs for adoptees, a funding level which would eventually decrease to 90 percent by 2020. The goal of the expansion was to:

Ultimately, only 19 states declined to expand their Medicaid programs, bringing the total number of individuals covered by the program to approximately 75 million—roughly 23 percent of the total US population—as of November 2016. In California in particular, more than 30 percent of its population is now enrolled in the Medicaid program, according to the Kaiser Family Foundation. 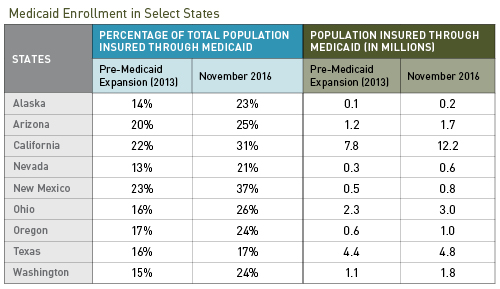 The program’s rising cost can be deceiving. It isn’t driven by the children and working adults who make up the majority of the enrollees. Instead, it’s largely driven by health care services provided to those with disabilities and seniors, particularly in assisted living arrangements, according to the Kaiser Family Foundation.

Conservative leaders in Washington, D.C. would like to control costs by ensuring greater financial accountability at the state level. They believe there’s little incentive for state programs to rein in spending when the federal government pays at least half of all standard program costs and 90 percent or more of Medicaid expansion costs.

One proposed solution is to make federal payments fixed and shift the risk of rising costs or poorly controlled spending entirely to the states. This could be accomplished through:

Previous Republican proposals have limited the growth of these grants to something close to the inflation rate, which is currently in the mid-2 percent range. This is far lower than the projected annual health care growth rate of nearly 6 percent, as described by Shefali Luthra in The Skinny on Block Grants—The Heart of the GOP’s Medicaid Plan (CNN, 2017).

This might not make a huge difference in one year, but the compounding effect of funding increases that are less than half the projected health care growth rate will put considerable pressure on states to control costs, reduce benefits, and limit enrollment.

More controversial is the way Medicaid expansion under the ACA will be handled. In February 2017, Republican leaders unveiled a provision to eliminate the 90 percent federal funding of expansion costs and replace it with:

While some states may choose to bear the brunt of the potential 40 percent funding gap, it’s likely that many won’t.

At a time when congressional conservatives need almost unanimous support to pass health care reform, nearly 40 percent of the 52 Republican senators come from states that expanded their Medicaid programs and may resist efforts to cut federal funding to the program.

A theme of the 2016 Republican campaign was eliminating many of the unpopular taxes used to pay for the ACA:

While getting rid of taxes may be popular, it will also put pressure on the rising deficit—a key issue for many conservatives.

On February 16, 2017, Speaker Paul Ryan presented a summary of what the Republican health care proposals will look like but didn’t include information on how they would be paid for. It may be challenging to gain support from Republican members of congress to offset the cost of health care reform through taxes and fees.

Medicaid continues to be a vital program to millions of Americans. Many of the states likely to be hit hardest by block-grant funding of Medicaid are wealthier blue states that didn’t vote in favor of President Donald Trump in the 2016 election—including Massachusetts, California, and New York. These states expanded Medicaid with the promise of federal funding, but if block grants are implemented at traditional reimbursement rates, their federal funding would decrease significantly. Impacted states will need to decide whether to:

These options will be politically challenging and may have a significant impact on how low-income constituents access basic health care services.

Chris Bell, a CPA, has practiced public accounting since 2005. His sole focus is providing tax and business planning services to physician groups in Northern California. Chris can be reached at (916) 503-8164 or chris.bell@mossadams.com.